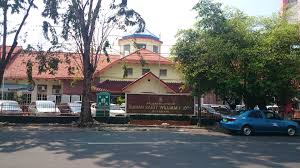 This hospital is one of a number which belong to the Salvation Army. This hospital has been initiated before the independance era, in the year 1924.
At that time it was a Maternity hospital.

Nowadays, the hospital is classified as a category C hospital (Reg.code 3578031) with 100 beds
The hospital is situated on the Jalan Diponegoro no. 34 at Surabaya (coordinates: latitude: -7,28 and longitude: 112,74).
The hospital has 364 employees. Of whom 70 medical doctors and 130 nurses, 18 midwives and 25 pharmaceutical personnel, 48 housekeeping and technical functions and 73 involved in management and administration.

The website of the hospital is: www. rswilliamboothsby.com. From this website we copied some historic data (Google translated and abbreviated):