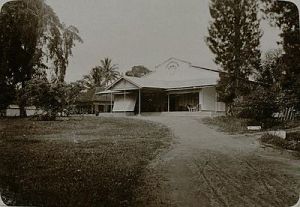 The hospital received a subsidy according the subsidy regulations of 1906 (Staatsblad van Nederlandsch-Indie 1906 no. 276).

Kediri was in the 1930s a residency, regency and district in the province of East java. Its capital was Kediri. The Regency of Kediri had 350,000 inhabitants of whom 2,800 Europeans and almost 9,100 Chinese. This region was occupied by the Government after the end of the Java war in 1830. The Residency has many rail- and tramways and has many Hindu antiquities (11th and 13th century) from the Hindu realm Daha. Many place names with tjandi and temples. Before the crisis there were many sugar mills (Gonggryp 1934, 642).

See Grote Atlas van NOI (Asia Maior/KNAG) p.311 which indicates the location of this hospital in the townplan of Kediri.