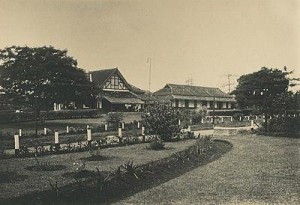 The mission hospital Donorejo (Gift of the King) was a general hospital that was estaablished by the Baptist missionary society at Kelet in the neighbourhood of Pati, Central Java in 1914. The picture was provided by the image collection of the KITLV of 1928, signature 94426. The picture was taken on 8 September 1928.

From Geneeskundig Tijdschrift voor Nederlandsch-Indie (GTNI 1939) 79, 2096: “Shadow and light were replacing each other. We had relied  on the support of Simavi in  building a doctor’s house, but this did not occur. Still, the house was built. The European nurse was taken off duty by repeated illness. There was much poverty among the Javanese population,especially in Juwana. As a result a lot of beggars and vagabonds were aiming at being admitted to the hospital. Therefore, the number of admittances rose to more than 2,000 for the first time in the hospital’s history. The most important diseases were malaria, yaws, ulcers, tuberculosis and venereal diseases. A few cases of black water fever, hunger oedemia, poisoning and snake bites, as well as amoebiasis and typhoid fever.