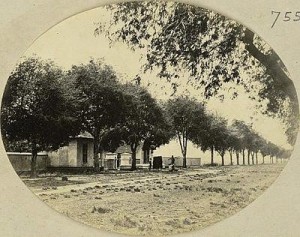 The Garrison hospital 1st class at Ujung Pandang (Makassar) is mentioned by D. Schoute in his publication: “De Geneeskundige Dienst in Nederlandsch Indie in de 19e eeuw”, GTNI 75 (1935) 10, 826. The infirmary was part of the Military Medical Service (MGD), which in 1867 (the year of the survey of all military facilities) managed a total of 79 facilities (3 large military hospitals, 35 garrison hospitals and 41 infirmaries) with on average 4,244 occupied beds. In that same year the hospital at Ujung Pandang had an average occupancy of 133 beds. Some 25 years later the Koloniaal Verslag published with Addendum D, the figures for the year 1890. The hospital at Ujung Pandang has in that year 780 inpatient admittances (353 Europeansand 427 Indigenous patients),whereas the year ends with a presence of 25 European and 34 indigenous patients.

Makassar (Ujung Pandang) was in the 1930s a department and subdepartment with a capital of the same name. It was part of the Government Celebes and Dependencies. The department has almost 670,000 inhabitants of whom3,700 Europeans and 17,000 Chinese. The city of Makassar itself has 87,000 inhabitants and is ruled by a municipal council and a mayor. Makassar is the ancient realm of Goa. It is inhabited by the Makassarese, whose language is narrowly parented to the Buginese of Bone. It is an importaant commercial town and used to be called the Key of the Moluccas (Gonggryp 1934, 793-794).