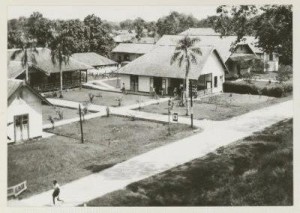 The mission hospital at Sambas (Westerafdeeling Borneo) was a general charity hospital that was founded in 1926 by the Roman Catholic congregation Franciscan Sisters of Etten.

See too: Dutch Missionary Activities, an oral history project of the University of Nijmegen concerning the lives and actiivities of religious brothers and sisters in the various mission fields in the world. Page 118. Interview 79, KMM file 161 with C.M. Franken (sister Sophie) who was working from 1924 to 1950 in Borneo.

Sambas was a selfruling Landscape with a capital of the same name of the department Singkawang, Residency Westerafdeeling van Borneo. The subdepartment Sambas has 68,500 inhabitants,of whom 65 Europeans and 4,300 Chinese. The river Sungai Sambas flows through the Landscape and has an estuarium of 1.5 km wide. The capital Sambas is situated on the river. The population  exists of Dayaks, Malayans, Javanese and Buginese (Gonggryp 1934, 1264).