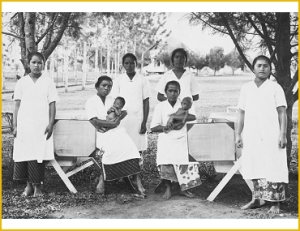 The picture is a portrait of a midwife and nurses with two orphans at the hospital of the Batak Institute at Kabandjahe. In 1919 this hospital was initiated by Governor General van Limburg Stirum and subsidized by the government and the plantation organization. It took a few years, before the new hospital opened its doors in 1924. The outpatient clinic with the hospital treated some 900 patients a year. Many persons got preventive injections, e.g. to treat and prevent struma, a much diagnosed disease under the Karo Batak people. In the hospital about 3,000 patients were treated per year. Beside a department for internal diseases there was a large department for infectious diseases, such as typhoid fever and dysentery. De Government doctor O. Paneth is medical director, assisted by 10 European nurses and 20 indigenous nurses. There were large differences in salaries. Source: Verslag van het Batak hospitaal in1924 by O.Paneth (s.l. 1925)  (CB:BR G 03-275) . The hospital was transferred to the Nederlands Zendingsgenootschap in May 1934 and was since then managed by this organization.