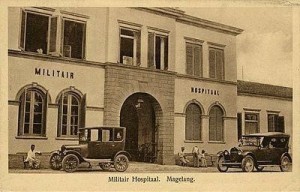 The Garrison hospital at Magelang (Kedu) is mentioned by D. Schoute in his publication: “De Geneeskundige Dienst in Nederlandsch Indie in de 19e eeuw”, GTNI 75 (1935) 10, 826. The hospital was part of the Military Medical Service (MGD), which in 1867 (the year of the survey of all military facilities) managed a total of 79 facilities (3 large military hospitals, 35 garrison hospitals and 41 infirmaries) with on average 4,244 occupied beds. In that same year the hospital at Magelang had an average occupancy of 54 beds.  Some 25 year later, the Annex D of the Koloniaal Verslag 1890 reports a total  of 3,359 inpatients for the whole of the Netherlands Indies. The average occupation rate of the Magelang hospital is then 341 inpatients, whereas 5,936 have been admitted that year. By the end of the year 204 European and 155 indigenous patients were present.

Magelang was in the 1930s a regency, district and subdistrict with a principal town of the same name. It belonged to the Residency Kedu in the province of Central Java. The regency has almost 626,000 inhabitants, of whom 4,500 Europeans and 8,000 Chinese. Important is the culture of tobacco. In the regency the Boroboedoer is situated and the tandjis Mendoet and Pawon (Gonggryp 1934, 790).