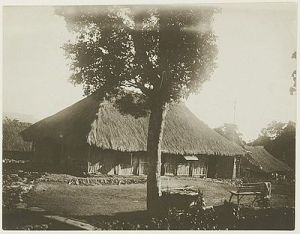 The Inlands (indigenous) hospital at Kapan on the island Timor was established about 1909. Its personnel was  appointed by the NI government. The image is dated 1909.

See also General hospitals 1940-Google maps for the location of the Kapan hospital.

In the 1930s, Kapan was situated in central West Timor to the south. The island of Timor belonged to the Residency Timor and Dependencies with the capital Koepang (also with a hospital). The island itself had 443,000 inhabitants, of whom 500 Europeans and 3,700 Chinese. The island is very mountainous and vulcanic. The contacts with the VOC dated from the beginning of the 17th century, when the Portuguese had their settlements for more than a century. The first Dutch settlement was at Koepang (Gonggryp 1934, 1410).