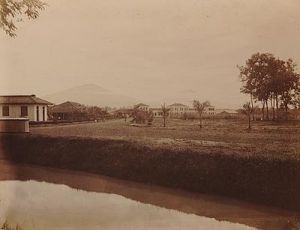 The Inlands hospitaal at Magelang, principal town of the Residency of Kedoe and the Regency of Magelang (Central Java) was founded about 1890. At least there is a picture of a hospital near Magelang, which dates back to that year. Probably this early civil hospital was mostly destined for the category of syphilitic prostitutes, for 20 years later the opening of a new Inlandsch hospital is mentioned.
The Staatsblad van Nederlands-Indie (NI Statutebook) no. 171 of 6 March 1909 (Decision Governor General A.F.W.Idenburg of  26 February 1909, nr. 28) mentions the opening of an Inlandsch hospitaal at Magelang and the appointment of 1 mandoer (supervisor) at a monthly salary of 25 and 3 male and 3 female servants (nurses), each at a pay of ƒ 12 monthly.
Later on this Inlandsch hospitaal was upgraded to a Gouvernements Burgerlijke Ziekeninrichting (Government Civil Hospital). This GBZ was closed on 1 October 1924 (Government Decision of 13 May 1927 no. 32).

In the 1930s, the Regency of Magelang (Residency Kedoe) had almost 626,000 inhabitants,of whom 4,500 Europeans and more than 8,000 Chinese. In the regency lies the Boroboedoer and the tjandi Mendoet and Pawon. Important is the cultivation of tobacco (Gonggryp 1934, 790).