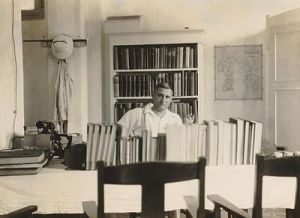 A Landschap in the Netherlands Indies was a self-governing administrative unity. As the decentralization policy of the NI Government progressed, not only regencies, municipalities or provinces, but also Landschappen took over existing hospitals from the central government. One of the examples was the Landschapsziekenhuis at Madjene.

The first mentioning of this Landschap hospital dates from 1932, see picture above from the KITLV collection. Before, about 1911 a combined Civil and Military hospital was founded at Madjene with a capacity of 34 beds (Annual Report Civil Medical service 1909).

In the 1930s, Madjene was the principal town of the division Mandar, Government of Celebes and Dependencies (Sulawesi). The division Mandar comprised the Landschappen Madjene, Pambaoeang and Tjenrana. The subdivision Madjene had more than 68,000 inhabitants  of whom 45 Europeans and 200 Chinese (Gonggryp 1934, 789).

See also General hospitals 1940 – Google maps, for the location of town and hospital.